As Mrs. D. and I were beginning an evening bike ride tonight, we noticed a gang of four turkeys foraging their way through a yard on 52nd St. just west of Nicollet Avenue. I had heard people in the neighborhood talking about seeing turkeys, but this was my first encounter with these wild beasts.

These magnificent examples of Ben Franklin’s choice for our national bird decided to cross the street (without looking both ways) and visit the family that lives at 111 W. 52nd St.

I'm not sure if they've been invited by these residents or not.

Maybe there's a barbeque in the back yard. Watch out!

What’s next for us? Moose? Elk? Rattlesnakes? Raccoons? Bunnies? Squirrels?

Tangletonians, get your guns. Thanksgiving is not far off.

People stop their cars and take photos.  Runners push themselves up the hill.  High school kids go up there to smoke dope.  Airline pilots look down and know they’re lined up with runway 12-Right at MSP.  Octagenarians Sam and Virginia Sarat, who live across the street, walk past as they do nearly every day.  The Washburn Water Tower in south Minneapolis is a landmark, yes. But it’s actually more like an old friend to those of us who live near it.  It’s hard to imagine what the top of our little hill would look like without it. 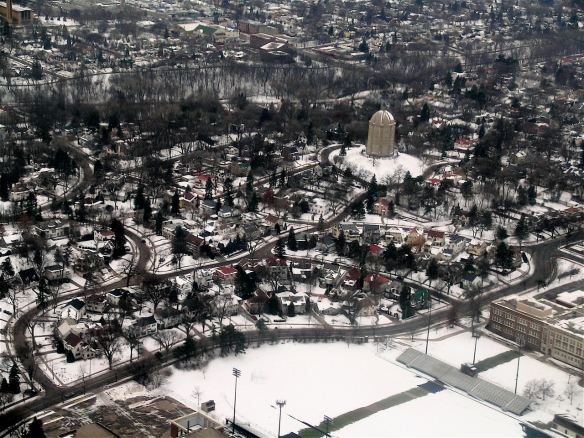 Similar photo that I took from an airplane in 2006.

This tower is actually the second one built on the site.  The original was built in 1893 and demolished in 1930 to make way for the current one.

Original tower was built in 1893 (photo from Minnesota Historical Society

Current tower under construction in the early '30s, before the scary guys were added. (photo from Minnesota Historical Society)

Our health is guarded (photo by Steve Date)

The tower was designed by three prominent men of the era. Harry Wild Jones, the architect, designed many other well-know buildings in the area, including the Lakewood Cemetery Chapel. The sculptures are by John K. Daniels, who did similar work for other buildings, including figures on the Washburn Flour Mills Utility Building in Minneapolis. The engineer was William S. Hewitt, who also invented a reinforced concrete construction method.

The tower is a cool thing to have in the neighborhood and makes a nice little park with good views.

Follow this link for an article about the history of the water tower from the Minnesota Historical Society’s MINNESOTA HISTORY magazine published in 1984.