. . . but nobody got too shook up about it, because it was baseball on a nice summer evening and that’s all that mattered.

I had my second outdoor baseball experience of the year last night, courtesy of Emily. She invited me to come down to Rochester and go to a Honkers game with her. While not Target Field, Mayo Field has it’s own charm.

The Honkers play in the Northwoods League, which is a summer league for college players from across the U.S and Canada — kind of a pre-minor league. Players are not paid, thus preserving their NCAA eligibility. According to the Northwood League website, “each team is operated similar to a professional minor league team, providing players an opportunity to play under the same conditions using wooden bats, minor league specification baseballs, experiencing overnight road trips, and playing nightly before fans in a stadium.” 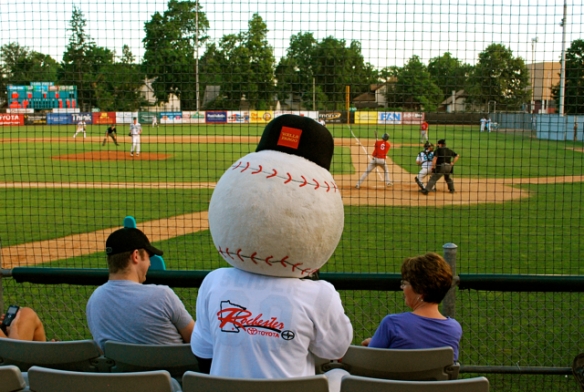 "Slider", the Honkers' mascot, is probably a good guy, but his big head does kind of block the view when he sits in front of you.

Some of the best entertainment at any ball game is provided by activities other than the game itself. “Slider” is a good-natured mascot (even though he is inexplicably not a goose). He made a point to slap a high-five with each of the 963 fans in attendance. He actually got us twice after we moved seats. 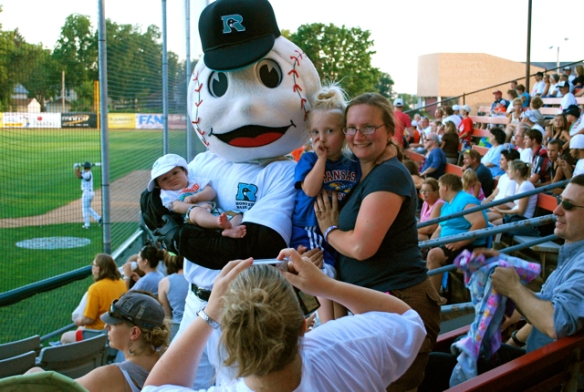 This is either a great photo op or a very odd family.

Like all good small town or minor league teams, the Honkers have lots of low-tech games and contests between innings to amuse us. There was a race between a kid and a ball-fetching dog, a “big shoe” race between two kids running from second base to home plate in opposite directions, a water balloon sling shot contest where if you hit the “Ci Ci’s Pizza” ad on the outfield fence you would get a prize from Perkins (?!?), and a dizzy run where everyone had to spin around and then run a race. But to me, the most funkily bizarre one was where they had a little kid try to kick a shoe so it would land (and stay) on a card table about ten feet away. He could kick the shoe as many times as he could in a minute that seemed like 10. The kid was exhausted and frustrated and I’m sure pretty pissed that he didn’t win anything.

No, these ladies aren't drunk and mooning the fans, they just finished spinning around with their foreheads on a baseball bat and now they're trying to run. The crowd loved this one.

The Honkers got trounced by the Thunder Bay Border Cats 11-3. Emily and I left in the 8th inning and walked to Rosco’s Drive-In for a root beer float. They were closed. Bad night?

Nah, it was a great night. Thanks, Emily. Can’t wait to do it again.