The Emperor undressed, and the swindlers pretended to put his new clothes on him, one garment after another.  The Emperor turned round and round before the looking glass.

“How well Your Majesty’s new clothes look. Aren’t they becoming!” He heard on all sides, “That pattern, so perfect! Those colors, so suitable! It is a magnificent outfit.

It’s been only 9 days since his coronation.  We’ve all been watching him perform self-proclaimed amazing and alarming feats of strength each day.  His opponents have been vocal, and his supporters have been oddly quiet (at least my Facebook friends who supported him, anyway).  In a way, I get it — there’s no need to stick your neck out right now in support of his impetuous actions and crazy words, because he doesn’t need you anymore. He is now the king, and he will rule. He’s going to do what he said he was going to do for as long as he can do it, and none of us can feign surprise. He’s what we thought he would be.

Many voted for him because they wanted a “strongman” — someone who would put a stop to all this compassion, fairness, and unalienable rights nonsense.  Most wanted him in power because he said he would shake up the status quo and “drain the swamp”.  But many Americans didn’t bother to vote at all.  Others chose a third candidate who had no chance of winning. Did they do that because they didn’t mind the idea of being ruled by a narcissistic bully?  Because  now we have one. We have a president that fancies himself as an emperor. To those of you who didn’t try to prevent this, aren’t his new clothes magnificent?  To those of us who see him for what he is, and find nothing but the world’s yugest ego, we need to keep calling out what we see, as loudly as we can, for as long as it takes.

And in alternative news  . . . . it’s been a quiet week here in Lake Wobegon.

(1/22/17) This is what some people on Lake Harriet in Minneapolis are doing to avoid hearing about what’s been going on in Washington this week.  But if you ask them, they claim to be trying to catch fish. 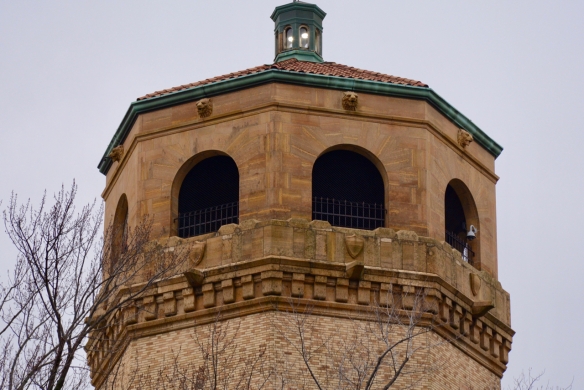 (1/23/17) The Highland Park neighborhood of St. Paul is home to one of 4 great old water towers in the Twin Cities.  Shown here is the top section of Architect Clarence “Cap” Wigington’s design, constructed in 1928. Wigington, an African American, was a renowned midwestern architect at time when there were few black architects anywhere. His tower, covered in Kasota and Bedford stone, rises 127 feet from its hilltop location. The 151-stair climb to the observation deck is only open to the public a couple of days each year.

(1/24/17) Any day I get to spend time with these two knuckleheads, it’s going to be hard for me to think a photo of anything or anybody else could be more noteworthy. Today, Dr. Svea said, “This is a special stethoscope.  I can hear your heart AND look at it at the same time.” Meanwhile, Nurse Otto took great pleasure in giving me several injections of an unnamed substance.

(1/25/17)  We were driving down West River Road, it was starting to get dark, and I didn’t have a photo yet.  Karen said, “look at that orange kayak”.  I whipped into the parking lot and met a young man named Cassidy who had just been out kayaking in the frigid Mississippi River.  “It’s still fun when it’s this cold”, he said, “but you have to be really careful, and let somebody know what you’re going to be doing”.  Thanks, Cassidy, I’ll try to remember to do that the next time I go kayaking in January.

(1/26/17) One of the things I’m very grateful for in the the neighborhood where I live, is that I can walk a few minutes in one direction and go to coffee shop or restaurant, or walk a couple of blocks in another direction and be in a place as quiet and natural as this. 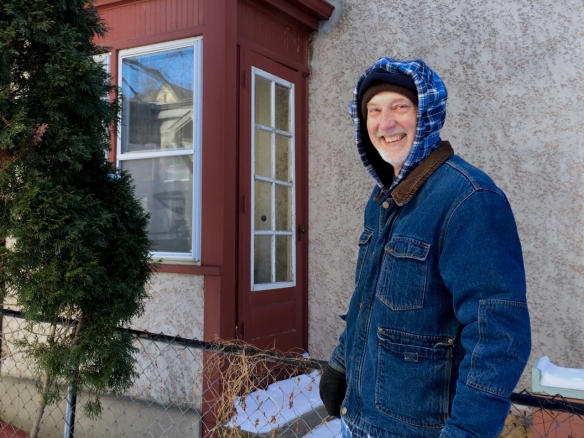 (1/27/17) Joel Beck is an old friend and a great carpenter.  He built a beautiful deck for us last year.  Today he stopped over to talk with me about possibly remodeling this old side entry porch into the world smallest bathroom. It would be a dream come true to be able to take a leak without going upstairs. 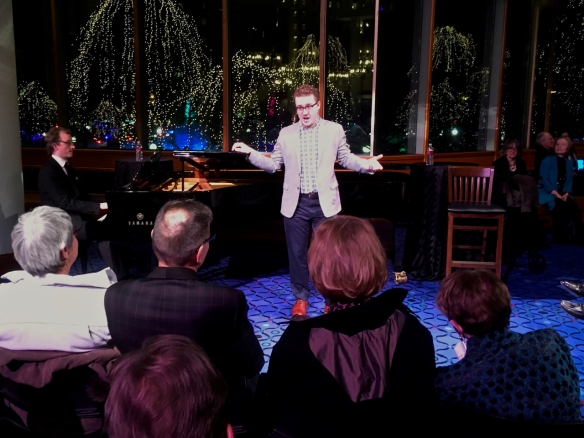 (1/28/17) We went to the Minnesota Opera’s production of “Diana’s Garden”, an almost unknown (but delightful) work by Vicente Martin y Soler. Soler was a contemporary of Mozart, and his musical style is similar to Wolfie’s.  Lorenzo da Ponte, Mozart’s favorite collaborator, wrote the libretto.  This photo is at the preview session in the lobby an hour before the show.  I love these pre-show shows — some history, some background, some musical theme stuff, and a couple of up-close arias from the show. Out the window is Rice Park, with its trees all lit up for the St. Paul Winter Carnival’s ice sculpture competition.  What a great night in downtown St. Paul.